Consider the common periwinkle.  It lives a life relatively invisible to humans, unless you happen to be on the coast in New England anyway.  Even then most people wouldn’t think anything of these creatures.  And why not?  The Common Periwinkle lives a modest life fixed to rocks or marsh grass, scarping and eating algae and hoping not to be eaten by predators. 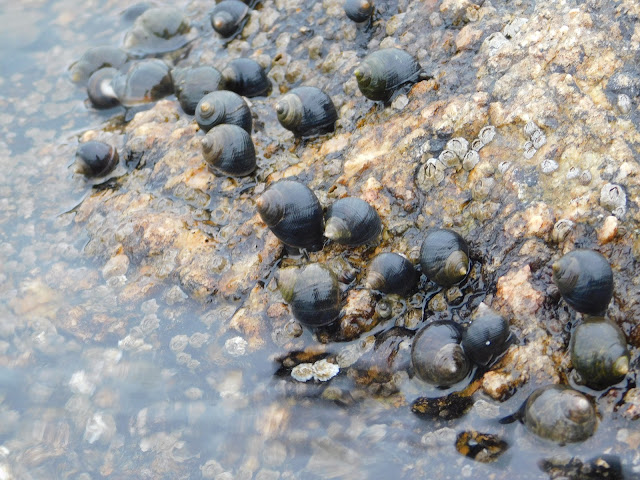 The Periwinkle (let’s drop the common, shall we?) is a survivor.  Its foot clings to rocks as waves crash and swirl around and on top of it.  At low tide they’re exposed to extreme temperatures.  At high tide they’re underwater for hours at a time, all while whelks, fish and even humans hunt you down to eat you.  At low tide I’ve accidentally stepped on periwinkles, and honestly a feel a little sad about it.  Life is a strange thing, and it’s easy to feel small in this world that we live in, looking out at the universe.  And yet the periwinkle offers a little perspective.  We’re small, but there are many creatures smaller than us.  Life can be challenging at times, but hey, I’m not clinging to a rock getting battered by waves while I scrape off my algae meal.

Today I’ve driven all over the state of Connecticut, and I’ll be honest, I look at the woods and see the ghosts of the Pequot who conceded this land to English settlers.  I also think of Benedict Arnold, a native son of Connecticut, betraying his own neighbors in battle after he defected.  These woods could…

Smallpox During the Revolutionary War more than 130,000 people living in North America died from Smallpox.  Of those fighting in the war, about 7000 died in the war, while more than 17,000 died from disease.  And smallpox was the biggest killer on the continent. Variola virus, or smallpox is spread through physical contact, airborne through…

The northeast United States is dotted with old forts that once played a critical role in our history.  Four of the most famous during the French and Indian War and the Revolutionary War were Fort Duquesne, Fort William Henry, Fort Niagara and Fort Stanwix.   They were famous because they each occupied a critical point…

There are many famous names at Westminster Abbey. The ornate carvings on ornate carvings give a collective sensory explosion in the brain. We may have skilled artisans today, but there aren’t many stone carvers doing this kind of work anymore. Stunning detail everywhere you looked. Add in the throngs of people touring and it can…

In some way my walk on Salisbury Beach today was a bookend moment for 2018.  I took a similar walk on this beach earlier in the year (writing about sea glass).  This time I was looking at my computer screen and decided I needed to take a walk.  Where better to walk than a quiet…