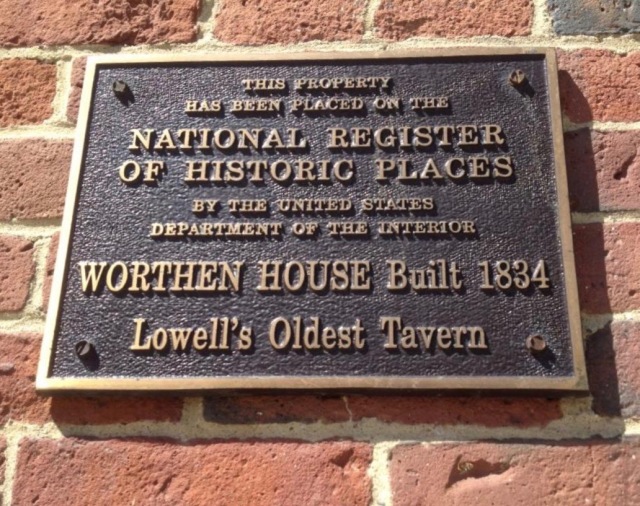 The oldest bar in Lowell, Massachusetts is today called The Worthen House.  Back when I was in college it was called The Old Worthen, and that’s still how I like to remember it.  If you walk into the place today you’ll find tables and a long bar that runs front to back.  The bar is essentially the same, but the tables were an addition after a fire gutted the old place.

They say that Edgar Allen Poe frequented the place and wrote at least some of The Raven here.  More recently, Jack Kerouac and Allan Ginsberg drank at the Old Worthen.  That’s all fine and good, and as a history buff I appreciate those who came before me, but for me the Worthen was our college bar.  I spent my formative drinking years at The Old Worthen, and those memories are locked in my brain more than any class I took in college.

Taking nothing away from the current place, back in the mid-1980’s The Old Worthen was a bit of a dump.  Wooden booths were jammed with hearty drinkers.  If you asked the bartender they’d give you a knife to carve your name into the walls.  We put away plenty of pitchers of cheap beer back in our day.

The Old Worthen had a juke box.  For the life of me I can’t remember how many songs that juke box had, but there were five that always seemed to be playing.  My Way by Frank Sinatra, Mercedes Benz by Janis Joplin, Crazy by Patsy Cline, Tainted Love by Soft Cell and the hairspray rock anthem for somebody, Here I Go Again by Whitesnake.  That’s an eclectic mix of songs if I ever saw one.   The songs that were playing were usually determined by which table had the most quarters.  When we ran out of quarters somebody would jump in with hairspray rock.

They say there’s a ghost on the second floor of the place.  I never saw a ghost in all the time I spent in that building, but then I never did get up to the second floor.  I like to dance with ghosts, as I’ve written about before.  But for me that doesn’t mean some spirit moving the plates around, it’s looking up at the leather belt driven ceiling fans and knowing I was looking at exactly the same thing that Jack and Allan were looking at 30 years before me.  A part of me lives on in the Worthen, as it does for thousands of others who walked through that front door.

I’ve been back to the Worthen a couple of times over the years since college, but my time there is done.  The Worthen House belongs to the next generation of drinkers.  And just as the experience I had in the 80’s was different from the experience Kerouac had in the 50’s and Poe had in the mid-1840’s when he was living on the second floor, so too the experience is likely different for the generations that have come after me.  But I’m happy that it keeps on going year after year.