I have a fascination with maps, and especially old maps, that dates back to when I was a kid tracing the route that we would take on family vacations.  When I started driving myself around I bought maps to help me navigate first the town I lived in and later New England and points beyond.  As a hiker I’d plot out where I’d be able to refill water bottles and camp for the night.  Maps were essential for navigating the world.

Today GPS has stolen the magic of maps for everyday use in getting from point A to point B, but they can’t completely replace them.  I still plot out trips on Google Maps to plan the most efficient route.  I still love a good map; evident in the title of this blog.  So it was a delight to find a gem of an old map from 1761 created by Joseph Blanchard and Samuel Langdon.  This map has wonderfully random reference points like “From Connecticut River to a Great Pine Tree” and “This way captives have been carried by the Indians”.  This is a map you can fall in love with. 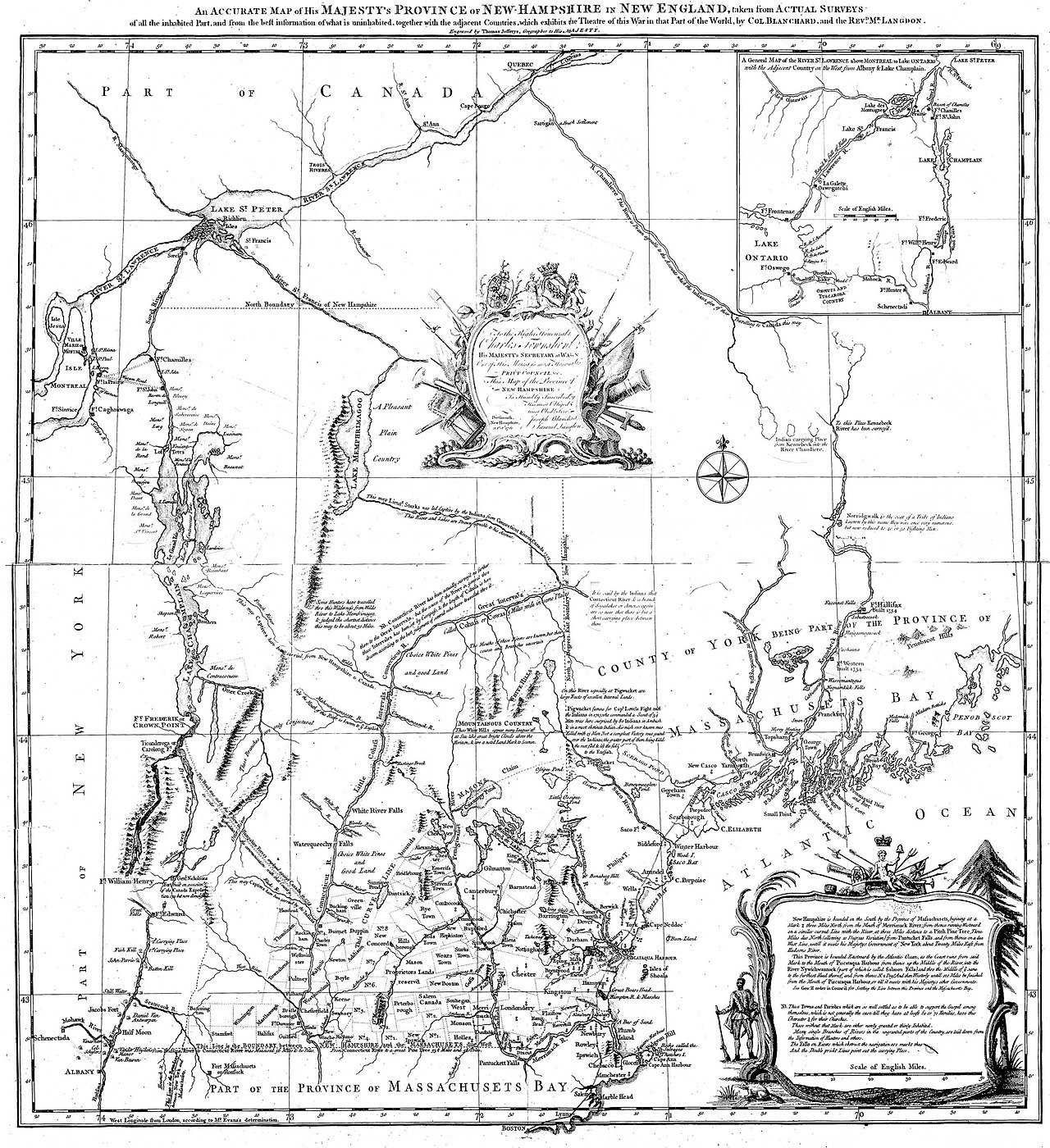 Joseph Blanchard was born in the Nashua area and served as a Colonel during the French and Indian War.  He teamed with Samuel Langdon to create this map, which was published after Blanchard’s death.  It’s an amazing time capsule that highlights some contentious early days in our colonial history.  For me, the part of the map I love the most is in the present-day Plainfield/Montcalm area where the map designers noted “choice white pines and good land”.  A name like Montcalm jumps out if you’re talking about the French & Indian War, but apparently it’s not what the selectmen in that town were striving for when they named it.

If you search online you’ll find there are a couple of versions of the map available for  viewing.  The black and white version I have above, and a color version, a portion of which I show below.  The towns have mostly remained the same, with a few splitting into a multiple towns along the way.  The rivers are fairly accurate, which is notable since these were the superhighways of the day.  The map reaches as far west as Schenectady and as for North as Quebec.  This territory was ground zero in the French and Indian War, and the wars with the French that preceded it.  It would be important again during the early years of the Revolutionary War.  I’ve had the opportunity to travel most of this region over the years, and spend a lot of time writing about it in this blog.  So this map put a spell on me that I haven’t shaken loose from just yet.

“The paradox of mapmaking… is that as soon as you begin shrinking a geography down to usable size, you necessarily are forced to misrepresent it. By making choices about what to include and what to leave out, you change the map from a document faithfully documenting an area to one furthering a particular point of view.” – Michael Blanding, The Map Thief

Blanchard and Langdon created a map that clearly furthered a point of view, lending credence to Blanding’s observation. The history buff in me delights in reading it. Would it look the same if a Native American warrior had drawn it? Surely not. But the map no longer serves the purpose of furthering a point of view as much as it creates a snapshot of what the map’s creators were thinking at the time. Either way it’s a fascinating dance across time.

Sunday night, while sitting around the fire in conversation, a large wild creature moved through the woods, announcing its presence with the crunch of dried leaves and crack of fallen twigs. Not a deer. Not a raccoon or a skunk. Definitely not a squirrel. I quietly walked into the house for the big flashlight and…

Los Angeles is beautiful and ugly all at once. Spectacular weather, beautiful beaches and incredible mountains hovering over you. I can see why people are drawn to these things. But then there’s the other Los Angeles. The homeless population, the grossness of Hollywood Boulevard, and worst of all, the lack of anything resembling an effective…

Richardson’s Tavern When the Erie Canal was being constructed, it ignited the local economy along its length first as laborers moved in and eventually as the travelers on the canal moved through the area.  One such boomtown was Perinton, a canal town with a tavern located alongside the Erie Canal where travelers could get a…

Travel Bug I was watching a program on television where the host was exploring Bermuda and eating a fish sandwich at Woody’s.  I admit it choked me up a bit.  Not because I have a soft spot for fish sandwiches (though I do love a good fish sandwich), but because it’s a destination “out there”…

Sitting on a small hill in York, Maine is a gambrel-roofed wood and stone building of consequence.  With the original construction beginning 300 years ago this year, it’s been a unique witness to history.  This is a building with stories to tell. Gaol means jail, and that’s what this building was for the Province of…

It occurred to me that many of my bucket list places to visit skirt the outer edges of populated areas.  I’ve written about a few places that are literally the edges – like the precipitous cliffs of Portugal and the easternmost point of the North American Continent in Cape St. Vincent, Newfoundland.  I love being…